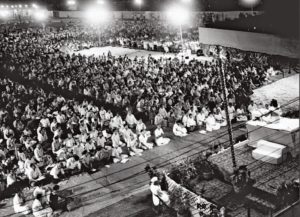 The Srimad Bhagavad Gita, the Divine Song of the Lord, is one of the most famous scriptures that impart Vedantic knowledge. Pujya Gurudev Swami Chinmayanandaji, also referred to as the Geetācharya, stands unique as one of the most influential Vedantic teachers of modern times. With his engaging, profound and insightful discourses on the Bhagavad Gita, he touched the minds and hearts of millions around the world, inspiring them to live a life of values and become positive contributors to society.

Why chant the Geeta? 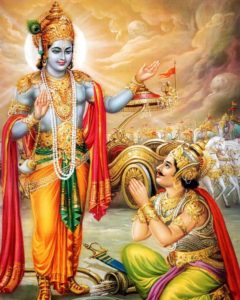 tudent – child and adult alike – to the Bhagavad Geeta. From this arises the desire to know its meaning, which leads us to study the Geeta and to imbibe the knowledge therein. Knowledge translated into action becomes a way of living one’s life successfully and joyously.   Pujya Guruji Swami Tejomayananda has composed a verse explaining why we chant the Bhagavad Geeta. He has explained the logical design of Geeta Chanting as Chant, Study, Know and Live.

We have had Bhagavad Geeta Chanting classes at our Bala Vihar since 2002 and members of our Study Groups are also learning to chant the Geeta since many years. Our children and adults have been participating in the Geeta Chanting Competitions hosted by CMSJ from 2002 and have acquired the distinction of being known as good chanters.  We are grateful to the CMSJ ācharyas and family for their generous welcome through the years. We have been fortunate to learning the teaching of the Geeta in Jnana Yajnas since 2005 from our visiting ācharyas.

We have been observing Geeta Jayanti every November/December since 2002, chanting the chapters that we learned every year, adding more and more chapters as we learned them. We had completed one cycle of learning to chant the entire Bhagavad Geeta in our Study Groups by 2015, the year that we were celebrating Puja Gurudev’s Birth Centenary. We had a wonderful learning experience that year as the entire Bala Vihar family of children and their parents learned to chant Chapter 15. We did a sampūrṇa Bhagavad Geeta pārāyaṇa  or chanting of the entire Bhagavad Geeta as part of our inauguration festivities as we moved into our very own center at Chinmaya Triveni, and have been doing so for our Geeta Jayanti celebrations since.

Now that we have our own center, Chinmaya Mission Sacramento is pleased to announce that we will host our inaugural Bhagavad Geeta Chanting Competition at our new home, Chinmaya Triveni from 2017.

The aim of the Geeta Chanting Competition is to encourage everyone to chant, study and live the essence of the Geeta teaching that Lord Shri Krishna imparted to us through Arjuna.

It is open to children, youth and adults. Both Chinmaya Mission members and non-members of the greater Sacramento area are invited to participate. Everyone is encouraged to register and participate in a category that suits them.